At the beginning of the poem, the poet laments bitterly the life he led before he met his present love because he sees it as a waste of effort, time and energy. He describes such needless experience as childish and mere play. His past love (relationship) cannot be considered to be genuine since he was completely unaware of himself when the love was consummated. The union in question is self-sufficient and perfect than hemispheres; for it makes the lovers immortal.

It probably assumed that the persona’s former love life was in shambles and full of deceit compared to the new found love which is more perfect than life itself. The poet therefore goes further to compare himself and his beloved with the use of conceit; farfetched metaphor of “Seven sleepers den” to express that their entire life was nothing more than unconscious and meaningless life. Had they enjoy any fort of pleasures and joy, those were nothing but figment of imagination. The poet opens up his heart in the praise of his beloved “If ever any beauty I did see; which I desired, and got it’ was but a dream of thee”
°°°°°°°°°°°°°°°°°°°°°°°°°°°°°°°°°°°°°°°°°°°°°°°°°°°°°°°°°°°°
SECTION C;Answer One(1) From This Section!!
(10)
The poem addresses the problem of leadership crisis in Africa and the lingering problem of endless search for credible and transparent leader who is brave, courageous, fearless and compassionate and our inability to find any because of lack of trust. In the poem, the animals in the forest don’t trust one another to take up the leadership role of the animal kingdom. “When the zebra says it’s his right to lead/the pack points to the duplicity of his stripes”. “The elephant trudges into power tussle/but its colleagues dread his trampling feet”… Zebra and elephant therefore are not fit enough to rule because they lack good leadership quality despite the fact that facially, they are qualified.

However, it is the same with the African masses who do not trust one another to take over the leadership role of the country. This lack of trust is caused by religious and ethnic diversity wherein an Hausa man prefers to vote or bequeath power to his fellow brother irrespective of the leadership quality possessed by the person, while the Ibo man thinks that it is only his brother who is a Christian and Ibo by tribe, is the only person that is able and capable to lead.

Also, the lion who is the king of the jungle feels that he is competent enough to lead, but the antelope who is a faithful follower remembers his ferocious (violent) nature and how he unleashes it on the weaker animals, he changes his mind towards him. Even hyena and giraffe cannot lead because they are not only visionless but also lack trust.

It is quite evident in this poem and it is responsible for underdevelopment not only in Africa but also in Nigeria. In the poem, the animals are not united enough to challenge the lion who “…stakes his claim to leadership of the pack”. His dominance and ability to lord it over and subdue other animals cannot be properly put to check because the led, that is, the followers, don’t have one voice and cannot also alter their situation. Hyena says he is qualified and credible enough to take the animal kingdom to the next level, but impalas say, he cannot, because of his deadly appetite for dead animal meats. The animals are at one another’s neck as they just can’t agree on whom to choose to lead them. This lack of unity and spirit of oneness among the animals can be likening to the disunity among the African leaders and the masses. This is largely because of the religious and ethnic diversity of the masses, which is responsible for their inability to pick any qualified person among them to rule and team up against the ruling class and wrestle power from them.

Towards the ending of the poem, the persona tries to suggest the likely solution to the problem of disunity among our leaders. “A good leader should be “tough like a tiger, compassionate like a doe / transparent like a river, mysterious like a lake”. With the above-mentioned attribute, a leader can cause a change and unity to strive among the people.
°°°°°°°°°°°°°°°°°°°°°°°°°°°°°°°°°°°°°°°°°°°°°°°°°°°°°°°°°°°°
SECTION B;Answer One(1) From This Section!!
(6)
Jimmy attacks Alison both verbally and physically throughout the play since his wife reminds him of everything he despises from the beginning. Jimmy verbally attacks Alison and her family members because he wants her to answer a question about an article in the newspaper but Alison defends that she has not read it yet. He humiliates and attacks Alison and her brother, Nigel.
Contrary to Jimmy, Alison does not give any direct reaction against Jimmy’s aggressive behavior. She prefers to maintain silence. She knows that if she gives any reaction to his attack, he will be triumphant. Alison’s silence and seeming ignorance can also be considered as a weapon in order to save her from Jimmy’s assaults. Jimmy not only attack Alison but also other members of her family and her friends. He calls her parents “Militant, arrogant and full of malice”
He labels her friends “sycophantic phlegmatic and of course, top of the bill pusillanimous.
Jimmy also hates Alison’s mother because she is dedicated to her middle classrooms and her concern about her daughter marrying a man beneath her social status that she even hire a detective to watch Jimmy because he does not trust him. This makes him angry at middle-class value. He therefore calls Alison’s mum “old bitch” and she should be dead.
Consequently, Jimmy’s anger against every member of the play can be attributed to his rough and thorny background and his loss of childhood. Jimmy is frail and insecure because he says he was exposed to death, loneliness and pain at a very early age.
°°°°°°°°°°°°°°°°°°°°°°°°°°°°°°°°°°°°°°°°°°°°°°°°°°°°°°°°°°°°
(7)
Troy whose income cannot even settle his family’s need is busying dragging the family name on the mire.
So, Troy struggles to fulfill his role as a father to his son and husband to his wife. He does not do much before his demise. The family he ruled with Iron hand or hard-handedness is torn apart, as his son; Cory turns against him and also becomes a rebel. After leveling serious criticism on how Troy tormented his life and dreams for a better future, he vows not to attend his funeral.

Cory laments bitterly, Troy’s adulterous act with Alberta also contributes to Troy’s backwardness and family disintegration. The nature of trust between Rose and Troy is broken here, because Rose has vowed never to have anything to do with Troy, especially when the news about Alberta’s pregnancy for “Troy filters in.

To further demonstrate that Rose is an embodiment of unity and family’s rebirth, she tries to convince Cory not to speak despicably against his dead father and to assure him that Troy means well for the family, “Your daddy wanted you to be everything he wasn’t… and at the same time he tried to make you everything he was… he meant to do more good than he meant to do harm” Rose cautions Cory. Troy also sees Rose as a good woman capable of uniting the family when he says…

Also, Rose forgives Troy and accepts to bring up Raynell, that is, the illegitimate daughter of Troy and Alberta who died shortly after child birth in order to promote peace harmony and family integration in Maxsons.
°°°°°°°°°°°°°°°°°°°°°°°°°°°°°°°°°°°°°°°°°°°°°°°°°°°°°°°°°°°°
SECTION A;Answer One(1) From This Section!!
(1)
In Senehun and Mendeland at large, women are not treated as equals of men. Women are considered fragile, vulnerable and incapable of managing crises. At the beginning of the play when Gbanya drags Yoko into the inner chamber, he claims that he needs Yoko more than her Sande girls. To him, women have no responsibility than to satisfy men’s sexual urge.

Initially, Gbanya has promised Yoko she would be his successor. However, with troubles around, he feels reluctant to handover the throne to her because he believes women cannot handle a land at war. This is the same stance of Lamboi. The excuse he gives for wanting to kill Gbanya is because he does not want the latter to appoint Yoko as his successor. 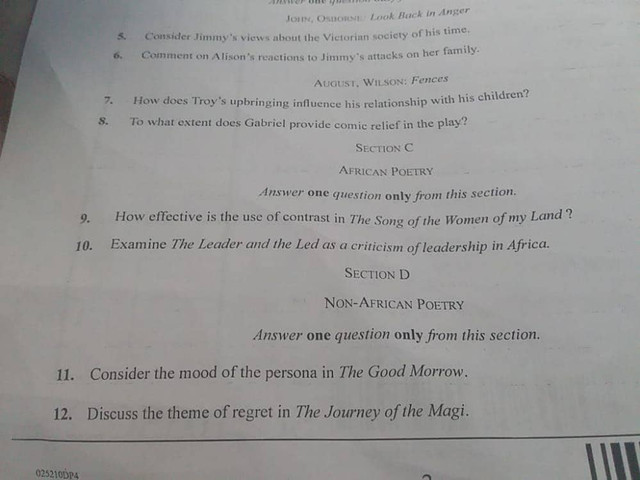